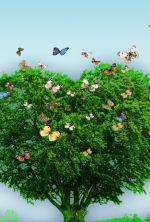 Shows God’s great mercy and grace to His sons, in that every believer has been crucified with Christ, dead, buried, quickened, raised, seated with him, and made manifest with him in glory.
SNT – 738